Larry Blake has long been a fan of cartoonist John Stanley (1914-1993) and his work on the Little Lulu comic books of the 1950s. In 1999, Larry inked and colored a page penciled by Stanley, one of the last drawings completed by him before his death in 1993. Both pages were published in HoLLywood Ecelectern, the Little Lulu fanzine, John Stanley's in 1993, Larry Blake's in 1999. This year, Fantagraphics Books published a biography of John Stanley, and it includes images of that same penciled page and Larry's inked and colored version: 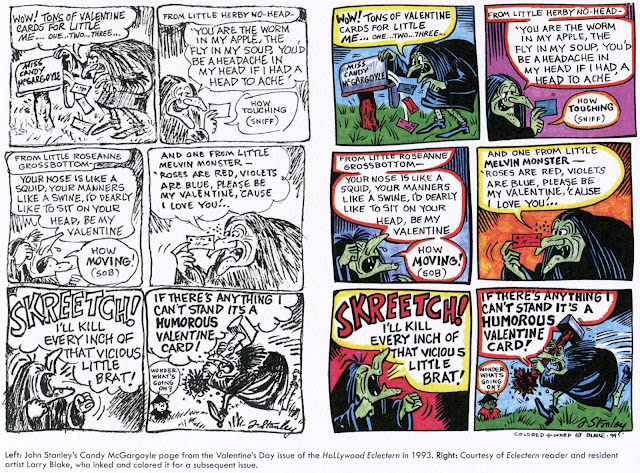 The Fantagraphics biography is called John Stanley: Giving Life to Little Lulu, and is was written by Bill Schelly, associate editor of Alter Ego. Congratulations to Larry Blake for once again having his artwork published hardback.

Mothman Welcomes You to West Virginia!

There is, as far as we know, only one Mothman, and he is from West Virginia.

There is also only one Mothman Museum, and it's in West Virginia, in Point Pleasant to be exact.

There is of course only one West Virginia, and that is West-By-God-Virginia.

And there is only one Gary Gibeaut as far as anyone knows. He's from West Virginia, too, just like Mothman.

So when you come into West Virginia and stop at a welcome center, like the one on Interstate 68 near Hazelton, you might find an advertising card about the world's only Mothman Museum, located on the opposite end of the state in Point Pleasant. And if you look closely at that brochure, you will see Gary Gibeaut's Mothman artwork, which is on prominent display at the museum.

Now if you want any of Gary's artwork, you don't have to settle for an advertising card found at a welcome center. Instead, you can go to the Mothman Museum where you will find Gary's posters, comic books, postcards, stickers, and pins. They don't have to be Gary's, though. They can be yours, too, for the right price. Better yet, you can go to the Mothman Festival, this year on the weekend of September 16-17, and meet Gary Gibeaut in person, talk to him, and ask him to sign his artwork for you.

Even so, you might hang onto that card you found at the welcome center. After all, it led you to Point Pleasant, home of the world's only Mothman. (We think.)

A YouTube user named Mothman Historian has posted a video showing his collection of Mothman comic books and other books. In his video of almost thirteen minutes, Mothman Historian reads Gary Gibeaut's story "The Abridged Mothman" from Mothman #1, published in September 2015. He follows that with a look at Mothman 'Toons, a series of cartoon books by Jason Gibeaut and Larry Blake. Jason and Larry have three collections of Mothman 'Toons and are working on a fourth. Finally, Mothman Historian looks at two coloring books by Terence Hanley with not only Mothman but also the Flatwoods Monster, the Men in Black, and Indrid Cold, all of West Virginia. Here is the link to Mothman Historian's video: 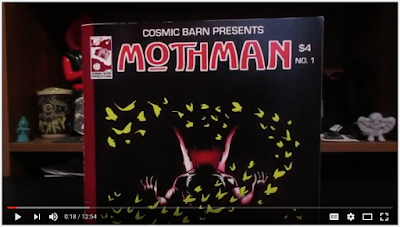 A YouTube user named Mothman Historian has posted a video showing his Mothman shelf, a collection of books, toys, figurines, and other collectibles and memorabilia in his home. It's a nice collection and includes books and other items by Gary Gibeaut, Jason Gibeaut, Larry Blake, and Terence Hanley. Mothman Historian also has art by Andy Finkle, an artist we met at the Mothman Festival in September 2016, as well as patches by George Coghill, whom we met in 2015. The video is about fifteen and a half minutes long. Here is a link:


In February 1913, fresh from the success of "Under the Moons of Mars" and "Tarzan of the Apes," both published in magazine form in the previous year, Edgar Rice Burroughs began work on a new novel, again to take place in a lost world. Entitled "The Cave Girl," it was serialized in The All-Story in July through September 1913. Like most of Burroughs' novel-length stories, it was reprinted in hardback, in this case as The Cave Girl in 1925. A sequel, "The Cave Man," appeared in All-Story Weekly in March and April 1917, but it doesn't seem to have been reprinted until recent years, and then only digitally.

The Cave Girl is the story of a contemporary man, Waldo Emerson Smith-Jones, and his adventures on an unexplored island in the South Pacific. There he finds and is rescued by a cave girl named Nadara, who returns him to her village. Along the way, she dubs him Thandar--"The Brave One." In actuality, he is a weak, fearful, and bookish scion of Back Bay, Boston, but over the course of several months' training, Smith-Jones--now Thandar--strengthens his body and learns to survive in his new home. He falls in love with Nadara and becomes a leader of her people. After further operatic adventures, Thandar--now Smith-Jones--is reunited with his parents. It is revealed then that Nadara's parents came from the outside world and that she is actually an aristocrat by the name of de la Valois. Thus the way is cleared for her to marry her champion. Very convenient.

The Cave Girl went through seven hardbound editions from 1925 to 1940. In 1949, Dell issued a paperback version as part of its famous "map back" series. Many more paperback versions followed over the years. The story of the cave girl Nadara and her almost anagrammatic lover Thandar is now in the public domain. Consequently, it has proliferated in our digital age. In 1985, that golden age of teen movies, Crown International Pictures released Cavegirl, in which a boy from the twentieth century travels back to prehistoric times, there to find the girl of his dreams. It's unlikely that Cavegirl has anything to do with The Cave Girl, although the conventions of the lost-world story seem evident in its plot.

Many years before, in January 1952, a new comic book appeared on the newsstand. Called Thun'da, it was the work of writer Gardner Fox (1911-1986) and artist Frank Frazetta (1928-2010). Frazetta was then only twenty-three years old, but he had already been in the comic book business for seven years. Thun'da #1 would prove to be the only comic book that was entirely his work. In that inaugural issue, Roger Drum, an American airman, crash lands in a lost valley in Africa. Like Smith-Jones before him, Drum spends months conditioning himself for his new life. He also finds in Pha, a beautiful native of the valley, the love of his life. Also like Smith-Jones, he becomes the leader of her people. And like him, Drum earns a new name, the Thun'da of the title. Thun'da ran for six issues in all in 1952-1953. Bob Powell (1916-1967) took over for Frazetta in Thun'da #2.

Gardner Fox and Bob Powell introduced a new character in that second issue. Called Cave Girl, she is Carol Mantomer, the daughter of two Americans killed by African natives. Like Mowgli, Cave Girl is reared by animals and lives among them as their friend. Thun'da guest-starred in the first Cave Girl story. She had a backup feature in Thun'da #2 through #6, then got her own title for four issues (#11-#14) published in 1953-1954. As for Thun'da, he became the backup feature in Cave Girl. In 1952, his story was adapted to the silver screen in King of the Congo, a serial starring Buster Crabbe.

Gardner Fox was a prolific author and a voracious reader in every field. "Knowledge," he said, "is a kind of hobby with me." His library was vast, and he kept filing cabinets full of story ideas. Like so many writers of his generation, he grew up reading the novels of Edgar Rice Burroughs. There can be little doubt that he encountered The Cave Girl somewhere along the line, and certainly no later than the Dell paperback edition of 1949, for it's clear that Thun'da and Cave Girl are drawn from Burroughs' story. The names alone--Thandar vs. Thun'da--are the first bit of evidence. Beyond that, the plots are more or less the same, as are the origins of the cave girl character in each. None of that matters now, for Burroughs' version and the Fox/Powell version of Cave Girl are in the public domain, and that's how she came to be in Five Star Comics as well. 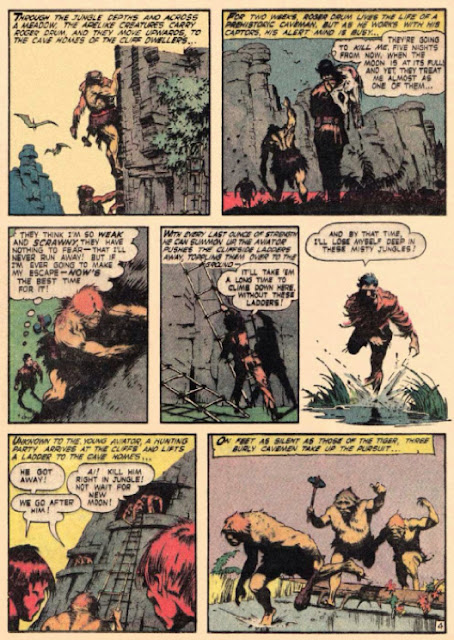 Note: Not long ago, I read Dian of the Lost Land by Edison Marshall, from 1935. It is very much like The Cave Girl and other stories of lost worlds in that a visitor from the effete or decadent outside world finds in himself courage, strength, hope, and fortitude in a place out of time. In Dian of the Lost Land, the protagonist also finds his true love in the queen of the people of that world. As it turns out, she, like Nadara, is the daughter of an outsider, thus is avoided any distasteful intermixing of peoples. Sometime between then and the movie Planet of the Apes (1968), the idea that a modern man can not and should not love a savage or primitive woman disappeared.

Edison Marshall (1894-1967) turned eighteen in the year that Edgar Rice Burroughs' first two fantasies went to print. A budding writer, he could hardly have been less impressed by Burroughs than others of his generation. He had his own first story published in The Argosy in 1915. In "Og, The Dawn Man" (1928, reprinted in hardback as Ogden's Strange Story in 1934), Marshall wrote about a man who crash lands in the Canadian wilderness and reverts to being a caveman. In Horrors Unknown (1972), Sam Moskowitz compared him favorably to Burroughs and to Rudyard Kipling. Dian of the Lost Land seems to have been Marshall writing in the mold of Burroughs. One difference is that Marshall was superior as a stylist.

Five Star Comics Down Under #5

Five Star Comics Down Under #4 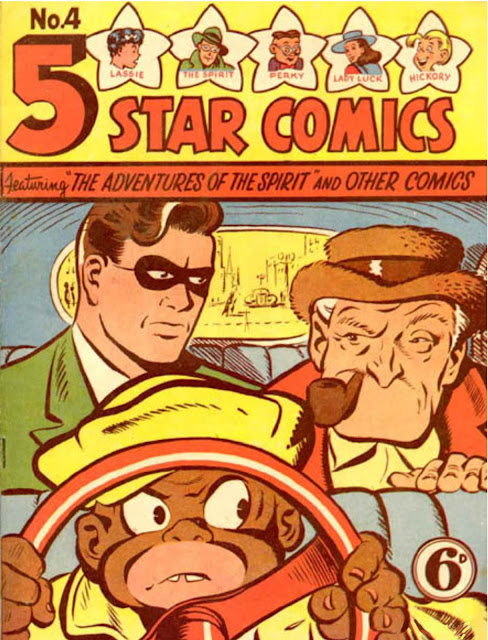 Five Star Comics
Ohio Valley, United States
Five Star Comics is a joint venture of cartoonists and comic book creators, some experienced, some just beginning, all committed to making fun and wholesome comics in the spirit of the Golden Age and Silver Age of Comics.

Links to Our Artists & Writers

Links to Other Artists & Writers